Carbon footprint and climate change
Monitoring and managing the main risks, opportunities and environmental impacts
Add to favoritesRemove to favorites
Management Report Growing with a long-term sustainable environmental approach Sustainable use of resources

Sustainable use of resources

The energy transition is Cellnex’s great challenge for the upcoming years. The Global Energy area is finalizing the Cellnex’s Energy Transition Plan, for which the Sustainability department is collaborating by setting appropriate guidelines in carbon emissions reduction calculation and SBTi management. The aim is to achieve emission reduction targets of 50% by 2030 and 100% by 2050. Energy transition plan will be a key lever to achieve Cellnex Carbon Footprint reduction goals via, amongst other actions, making sure that energy supplies to Cellnex are from renewable sources.

The Energy Transition Plan will be approved formally during Q1 2021 despite already first pillar, green energy consumption goals, has been already approved. This plan will detail the actions to be taken to accomplish the established corporate goals as well as the sensitivities to go beyond or accelerate the established timeliness and will also include the new companies integrated during 2020 as well as a clear action plan for those integrated in 2021 or later.

The Energy Transition plan is based on the four main levers of energy management: 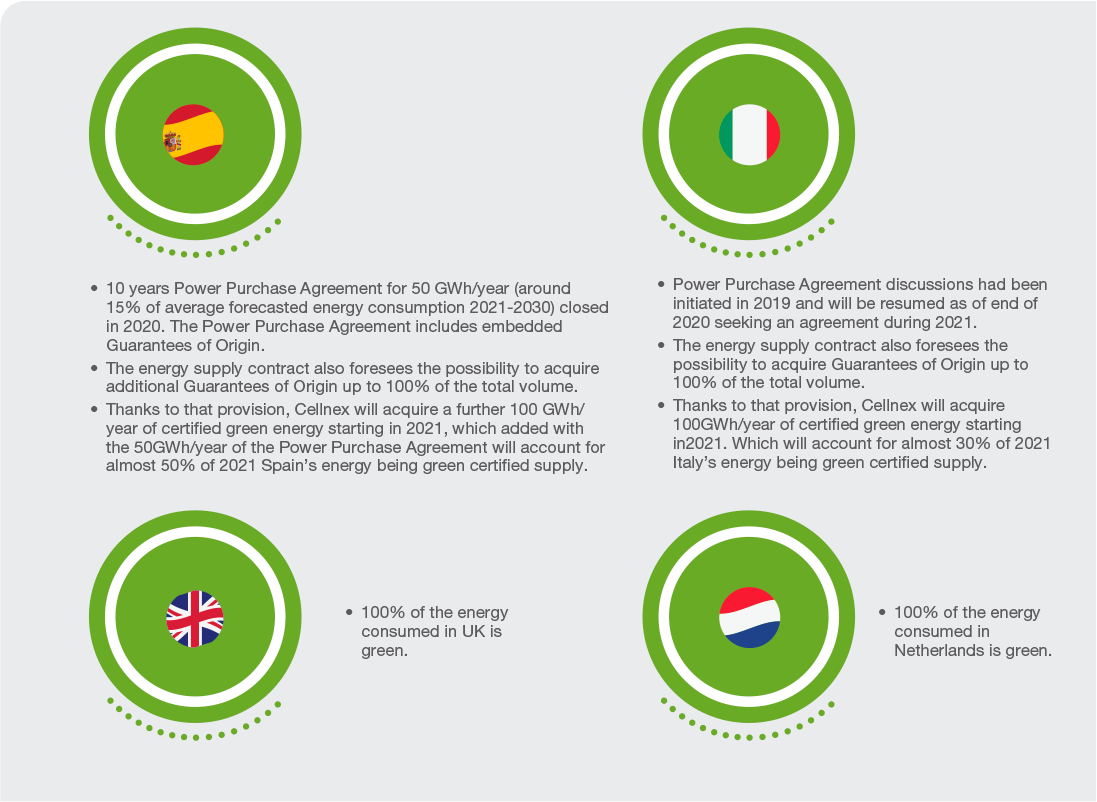 The Energy Transition Plan will be implemented in all the countries in which Cellnex operates. In some, specific actions have already been taken:

Thanks to these actions that are currently under way in the above-mentioned countries, in 2021 approximately 40% of Cellnex’s energy consumption will be green energy certified with Guarantees of Origin, without considering the increase in scope, derived from the latest acquisitions, especially the acquisition related to CK Hutchinson. Moreover, Cellnex will actively promote and closely work with its customers to ensure that 100% of group’s energy will be green by 2025 for the actual perimeter, and in not more than 3 years for any new acquisition.

Endesa and Cellnex have signed a long-term bilateral contract (PPA) by which Endesa will be the preferred supplier of 100% of Cellnex's energy in Spain for the next ten years. A minimum of 20% of the energy contracted will be 100% produced from renewables.

The relationship of trust between the two companies works both ways, as Cellnex has been declared Endesa's preferred supplier in terms of network.

The significance of the agreement reinforces the partnership with Endesa in the field of energy supply, also committing specific objectives in the field of renewable energy and promoting the energy transition that allows us to contribute to the objectives of reducing our carbon footprint and our impact on climate change.

Apart from Cellnex’s Energy Transition Plan, several initiatives have been launched to keep improving performance in terms of energy efficiency in all geographical areas with different scale and scope. Additionally, some pilots are being run and/or evaluated for further implementation. For example, the investment in new broadcasting transmitters with lower power consumption, replacement of AACC for free-cooling systems, replacing UPS and light fittings, etc.

In addition, collaboration projects are under way with other entities, for example a project with Enertika to implement photovoltaic self-consumption facilities in their main telecommunications centres.

In Spain, five energy efficiency projects were developed. These were:

Owing to the nature of Cellnex's business, the only material environmental aspect is, energy. Cellnex monitors the organisation’s energy consumption to achieve maximum efficiency and the lowest possible impact on the environment and hence on society. In this regard, for example Cellnex Netherlands, changed the heating of the building in IJsselstein and saved usage of gas. Moreover, in 2020 they dismantled the gas installation and gas-heater, therefore reducing yearly around 22,824m3 of gas.

Cellnex's activity does not require the consumption of water. All the water consumed in Cellnex comes from the municipal drinking water network and is limited to the use of the office’s toilets and kitchen. The following chart shows water consumption of Cellnex group in 2020. 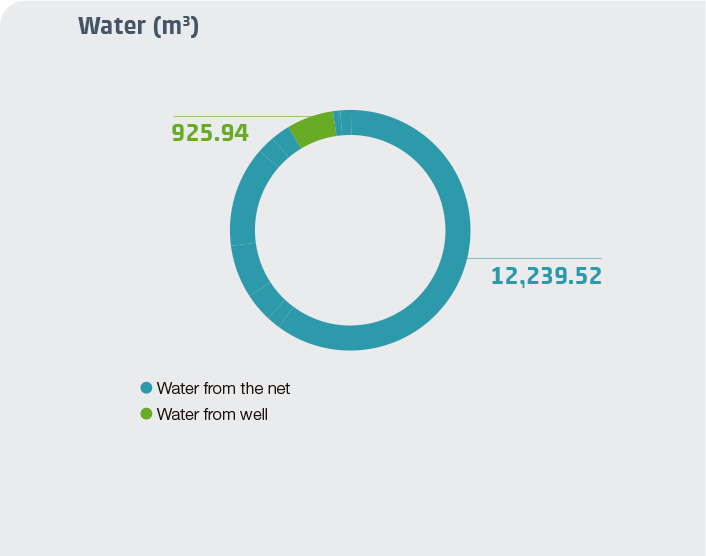 However, Cellnex can help the public and private sector in water management efficiency through different initiatives such as Internet of Things network for Integrated water resources management.

Cellnex Spain and Global Omnium, a company specialised in water management, have deployed an Internet of Things (IoT) network in the towns of Burjassot and La Pobla de Farnals in the Valencian Community (Spain) to facilitate integrated water resource management to public and/or private sector entities of these municipalities through data capture and transmission. They have also provided an IoT data management platform, which allows them to have information in real time and to act remotely, either manually and/or automatically, throughout the water cycle.

Adesal Telecom, the Valencian company partly owned by Cellnex and Global Omnium, is responsible for operating and managing the maintenance of these two IoT networks, based on LoRa technology, which facilitate automatic detection of leaks and preventive actions on these, remote meter reading or digital customer service and electronic invoicing, among other services.

Cellnex is not a waste producer, as waste arises from the supplier’s activities. The company is committed to ensuring that waste produced by its suppliers on Cellnex sites during their activity (construction, operation, maintenance and dismantling) is managed and disposed of at a licenced waste treatment operator. Cellnex requests evidence of the proper waste valorisation periodically and encourages its suppliers to find alternatives to waste disposal/incineration when possible e.g. recycling metal used to construct and maintain towers.

Cellnex Spain recovered 99,2% of the waste, including hazardous and non-hazardous waste.

Cellnex Portugal have detailed specifications for tower construction that its contractors must follow. These specifications avoid construction waste being generated due to miscalculation and ensure the towers are designed appropriately for Cellnex’s needs.

They have eliminated the use of some materials for durability reasons and will continue to monitor material options to identify opportunities for improving the durability of their towers.

Their contractors are responsible for materials used in preventive and corrective maintenance visits, providing contractors with an incentive to maximise resource efficiency. The towers are designed with the optimal materials so that they are efficient, and thus minimise the amount of materials necessary and waste produced in each maintenance intervention on the tower.

The Life Cycle Assessment for the Telecom Infrastructure Services began in 2020. Life cycle assessment (LCA) is a methodology standardised by ISO 14040:44 (2006) that systematises the acquisition and generation of information on the environmental aspects of products, services and processes by analysing inputs (consumption of raw materials and energy) and outputs (emissions to water, air, soil, waste and by-products) throughout all stages of their life cycle.

This study provides the organisation with a basis for taking objective decisions regarding sustainable development, identifying opportunities for improving the whole system and comparing technically viable and functionally equivalent alternatives. The main goals of the TIS LCA are: