Main Indicators
Ethics and compliance
Add to favoritesRemove to favorites
Management Report Showing what we are, acting with integrity Investor Relationships

On 20 June 2016, the IBEX 35 Technical Advisory Committee approved Cellnex Telecom’s (CLNX: SM) inclusion in the benchmark index of Spain’s stock exchange, the IBEX 35, which brings together the principal companies on the Spanish stock exchange in terms of capitalisation and turnover. This milestone brought with it a broadening of the shareholder base, giving Cellnex higher liquidity and making it more attractive to investors. At present Cellnex has a solid shareholder base and the majority consensus of analysts who follow our company +70% - is a recommendation to buy. 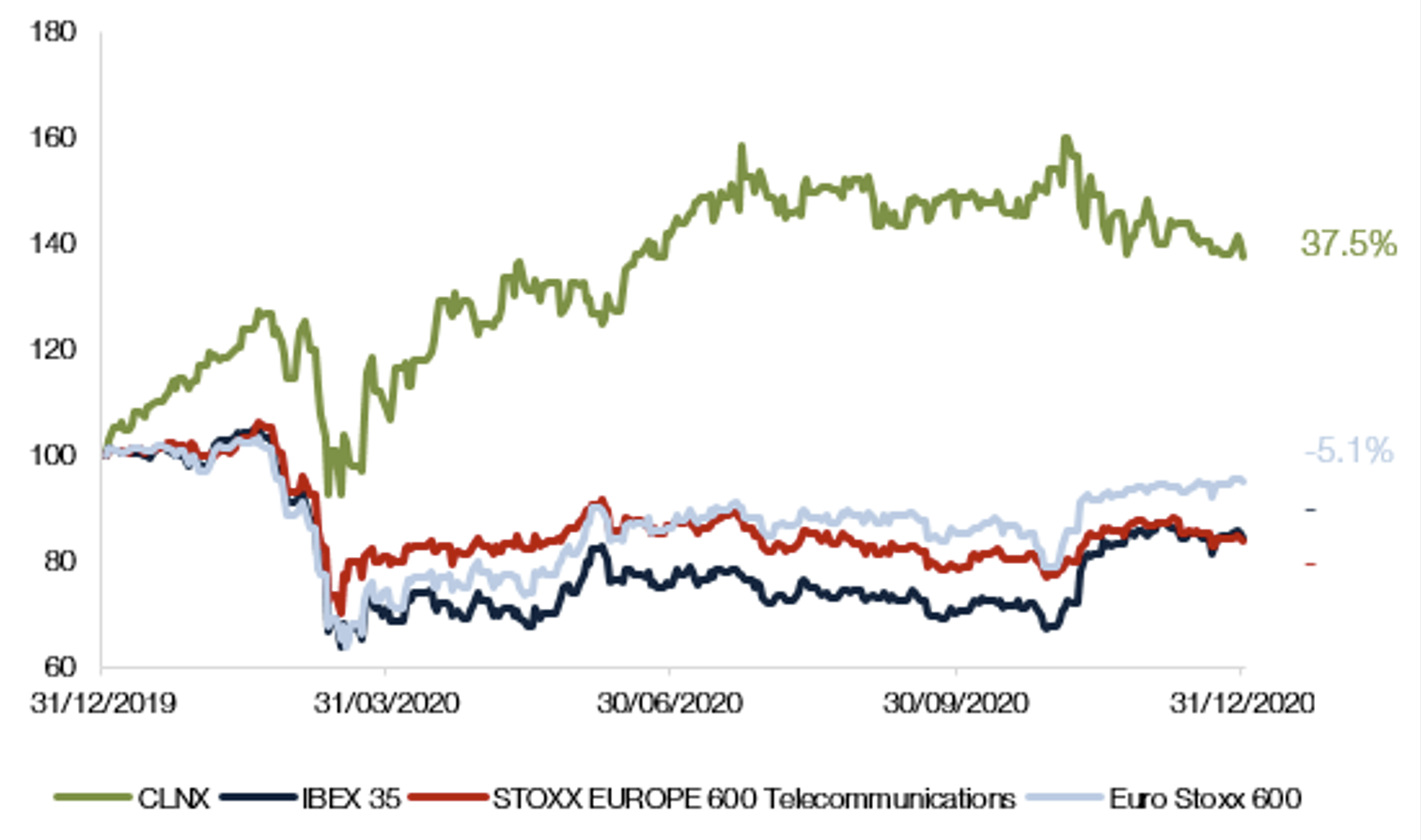 In accordance with the authorisation approved by the Board of Directors, on 31 December 2020 the Company held 200,320 treasury shares (0.041% of its share capital). It has not been decided to what use the treasury shares will be put and will depend on such decisions as may be adopted by the Group's governing bodies.

The treasury shares transactions carried out in 2020 are disclosed in Note 14.a of the accompanying consolidated financial statements.

Approved shareholders’ remuneration policy, which is amended from time to time, aims to keep the appropriate balance between shareholder remuneration, the Parent Company’s profit generation and the Parent Company’s growth strategy, pursuing an adequate capital structure. In the implementation of the Shareholders’ Remuneration Policy, the Company is focused on distributing an annual dividend by an amount increased by 10% with respect to the dividend distributed the year. As a result, each year the Parent Company distributes dividends against either net profit or distributable reserves attributable to the Company for the respective financial year.

On 31 May 2018, the Annual Shareholders’ Meeting approved the distribution of a dividend charged to the share premium reserve to a maximum of €63 million, payable in one or more instalments during the years 2018, 2019 and 2020. It was also agreed to delegate to the Board of Directors the authority to establish, if appropriate, the amount and the exact date of each payment during said period, while always respecting the maximum overall amount stipulated.

On 21 July 2020, the Annual Shareholders’ Meeting approved the distribution of a dividend charged to the share premium reserve to a maximum of €109 million, to be paid upfront or through instalments during the years 2020, 2021, 2022 and 2023. It was also agreed to delegate to the Board of Directors the authority to establish, if appropriate, the amount and the exact date of each payment during said period, while always respecting the maximum overall amount stipulated.

Thus, the total cash pay-out to shareholders distributed for the 2019 financial year was €0.06909 gross per share, which represents €26,622 thousand (€24,211 thousand corresponding to the distribution for the 2018 financial year).

Dividends will be paid on the specific dates to be determined in each case and will be duly announced.

Cellnex works continuously to maintain a good two-way relationship with its shareholders. To this end, there is a Policy for communication and contact, where it is stated that the Board of Directors will be responsible for providing suitable channels for shareholders to find any information in relation to the management of the Company, and for establishing mechanisms for the regular exchange of information with institutional investors that hold shares in the Company.

The Company has several communication channels to ensure effective compliance with the principles of the above-mentioned Policy, some of which are general channels, intended to disseminate information to the public, while others are private and primarily intended for shareholders, institutional investors and proxy advisors.

The general channels are the Website of the Spanish Stock Exchange Commission (CNMV) and other bodies, as well as the Cellnex Corporate website. The private channels for shareholders and investors to use are the various social networks on which Cellnex has an account (such as YouTube, Flickr, LinkedIn, Twitter, SlideShare or RSS), as well as the “Shareholders and Investors” section on the Company website and the Investor Relations Area. Concerns can also be expressed at the General Shareholders' Meeting.

Cellnex
improved its score
in the main sustainability indexes

In recent years, there has been increased interest and demand for the promotion of ESG activities, projects and operations in companies. Above all, investors are increasingly taking the social, environmental and good governance contribution of a company into account when considering whether to invest in it. To this end, Sustainability Indexes and other initiatives have been developed to evaluate the ESG-minded business practices of a company.

The results of the main indexes in which Cellnex participates, such as DJSI index, FTSE4Good and Sustainalytics, recognize the efforts made by the company in the last four years in ESG matters, improving the overall score in all of them compared to 2017. 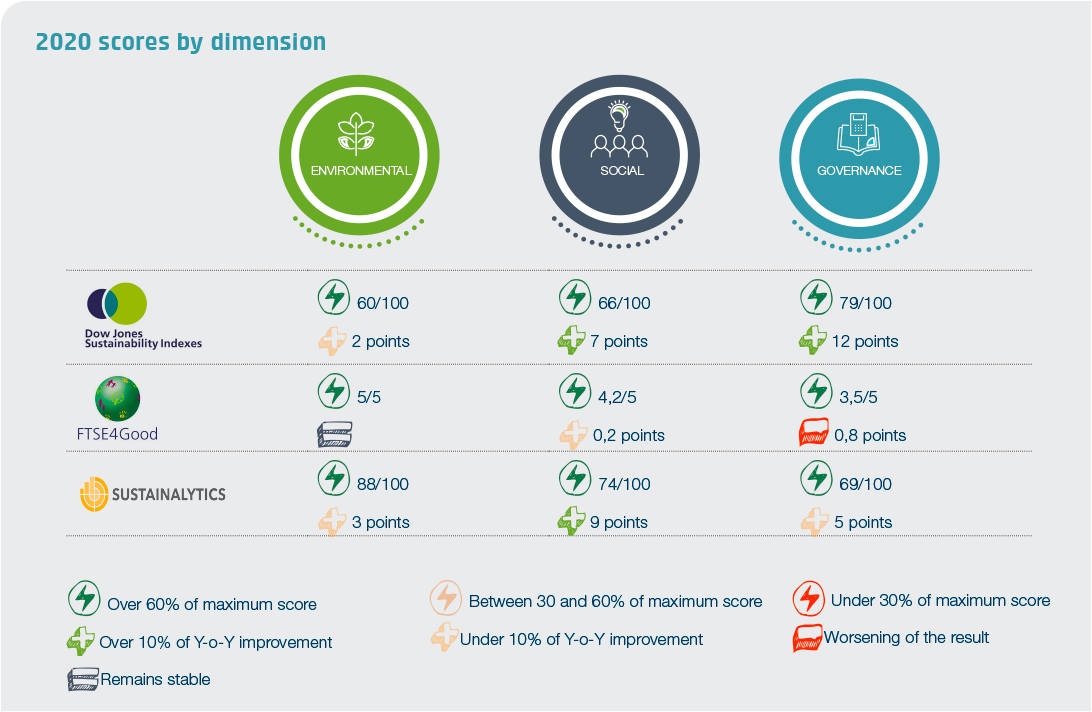 Besides these indexes, Cellnex participates in various ESG indexes that are presented below.

Each year Cellnex participates in the DJSI index as a guest company, obtaining good results and ranking above the industry average in the three areas evaluated: economic, environmental and social. While the industry’s average score dropped in all dimensions in 2020, Cellnex’s score increased across the board.

A detailed and independent methodology is used by CDP to assess the companies, allocating a score of A to D- based on the comprehensiveness of disclosure, awareness and management of environmental risks and demonstration of best practices associated with environmental leadership, such as setting ambitious and meaningful targets. Those that don’t disclose or provide insufficient information are marked with an F.

In 2020 Cellnex continued in the “A List” of companies leading the fight against climate change. The “A” score, the highest score allocated by the CDP means the company is still a Leadership Brand. Only 273 companies are part of the “A” List” of more than 8.400 companies and organisations analysed worldwide.

Cellnex has been a participant of the United Nations Global Compact since November 2015, as an expression of its commitment to including the corporate social responsibility concept into its operational strategy and organisational culture. Each year, the company publishes its COP (Communication of Progress) on the official Global Compact website.

The FTSE4Good index series is designed to measure the degree of compliance of companies that show a high level of competence in their environmental, social and governance practices. These indices are used by many financial market players as they create and evaluate so-called responsible investment funds and other products that integrate environmental, social and corporate governance factors into their investment decisions.

The indices identify which companies best manage the risks associated with these factors and are used to track indexed funds, structured financial products and as a reference indicator. They are also the benchmark for establishing comparisons between investments.

The ESG ratings, which mark the entry and ratification in the FTSE4Good indices, are used by investors wishing to incorporate environmental, social and corporate governance factors into their investment selection processes. They are also used as a reference framework to evaluate corporate commitment and to qualify corporate governance.

Cellnex was selected to become part of this index in January 2017. In terms of the overall assessment in the ESG Rating, Cellnex obtained a slightly lower score than in 2019 (4.2 in 2020, -0.2 than 2019). In any case, it should be noted that this has been a common trend, as both the subsector and industry averages followed a similar tendency.

Cellnex obtained the maximum score (5 out of 5) in the aspects related to corporate governance, anti-corruption measures, labour standards, and climate change. Aspects related to human rights and the community, as well as social aspects throughout its value chain, scored 4 out of 5. However, there is some room for improvement in environmental management throughout its supply chain (which scored 3 out of 5).

Standard Ethics Indices are a benchmark to measure, over time, the appreciation in financial markets of the principles and guidelines from the European Union, the OECD and the United Nations on sustainability, corporate governance and corporate social responsibility issues.

Cellnex has taken part in the Standard Ethics sustainability index since 2017, obtaining an “EE-” this year, the same as last year, equivalent to an adequate level for good compliance in governance, sustainability and social responsibility.

Cellnex is evaluated by Sustainalytics, an environmental, social and corporate governance (ESG) research and rating company for investors worldwide.

Cellnex made a qualitative leap in the Sustainalytics evaluation this year, rising in category in terms of “Market Cap” ($6bn to $12- $15bn), as well as in evaluation level (from Average Performer to Outstanding). This has placed the company is 7th in the Global Telecommunications Ranking.

This year its average score was 76 points, up from 70 in 2019. In this regard, Cellnex has improved its overall score in all the three dimensions, particularly in social issues, due to the actions developed regarding Diversity Programmes, Health & Safety Certifications and Community Involvement Programmes, and environmental issues, with the Environmental Policy and new Eco-Design requirements.

MSCI ESG Ratings aim to measure a company's resilience to long-term ESG risks. Companies are scored on an industry-relative AAA-CCC scale across the most relevant Key Issues based on a company's business model.

Cellnex joined the MSCI Europe index in 2019. For 2020, Cellnex has earned a "BBB" ESG Rating, improving its assessment from the previous year (“BB”). The company has undertaken initiatives to improve its labour management and ethics policies over the last two years, however there is still progress to be achieved on adopting industry best practices. Within the Rating, Cellnex falls into the highest scoring range on the Corporate Governance dimension relative to global peers, reflecting that the company's corporate governance practices are generally well aligned with investor interests.